Skip to content
Executive editor of issue guides and program officer at the Kettering Foundation. My views and thoughts here are my own.

I am active on social media. My Facebook profile is here (most active). This is my LikedIn profile. And my Twitter username is @bradrourke.

My friend, David C. Barker of American University sent me a copy of his new book, One Nation, Two Realities: Dueling Facts in American Democracy. It is an important addition to the current questions about “facts,” “truth,” “interpretation,” and “polarization.” 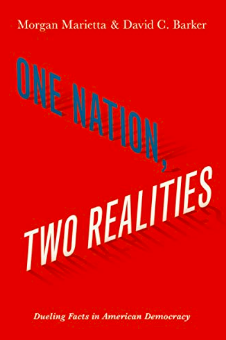 Co-authored with Morgan Marietta of UMass Lowell, the book is quite a comprehensive and I commend it to you.

In particular, the two write a remarkably clear description and outline of the the problem(s) with much of what people suggest as solutions to the “facts” puzzle. It is not so simple as just getting the right information out there.

I hope David won’t mind if I quote at length from the introduction which lays out some of the book’s argument; it is worth reading in its own right:

[T]he most commonly offered correctives—education and fact-checking—are not effective and may actually be counterproductive. Perhaps the most consistent (and sobering) finding across many recent empirical studies is that specific fact perceptions are not predicted by education or political knowledge. The evidence demonstrates that as citizens rise in political sophistication, motivated reasoning becomes stronger rather than weaker. Our findings regarding value projection reach the same conclusion. As cognitive resources grow, citizens simply become more adept at attaching their priors to their perceptions.

Contributing to education’s lack of efficacy in reducing DFPs [Dueling Fact Perceptions] is the erosion of trust in traditional sources of knowledge. Recent national surveys demonstrate that a surprisingly large proportion of Americans hold a low degree of trust in the knowledge created by universities. When the primary institution that discerns and disseminates knowledge for the nation is no longer trusted, this fosters a susceptibility to alternative sources of information. Our data bear this out more precisely. The changes in the perception of the university as an external source of authority are another foundation for pessimism about the effective role of education in creating a consensus.

For some of the same reasons, fact-checking does not ameliorate divisions in fact perceptions in the intuitive way we might expect. . . . [W]e provide a critical assessment of the epistemological foundations of the fact-check industry, and . . . reinforce other scholarly findings that citizens tend to reject the fact-checks that dispute their prior beliefs. Greater education merely facilitates this process. This is the case even among people who are predisposed to trust fact checkers, even when the perception relates to a candidate from the same political party. These findings further reinforce our conclusion that politically motivated fact perceptions are at least as much about value differences as they are about partisan tribalism and external leadership.

Finally, we find that the durability of DFPs is a reflection of the ideological symmetry of their origins. While some scholars have suggested that dueling facts are essentially a phenomenon of the Right, driven by conservative values and Republican leadership, it became clear in analyzing several years of survey data that this is simply not the case. . . . [T]he influence of value projection and partisan leadership is remarkably symmetric across various DFPs, and in some ways we find evidence of liberal asymmetry. . . .

Perceiving the world accurately has always been difficult, but the polarization problem has increased the epistemological problem. Unfortunately, there is more to the origins of dueling facts than laziness by the public and lying by elites; the core problem is not merely miseducation or misdirection but divided values projected onto perceived facts. Greater education and political sophistication are employed to sharpen rather than dull the connections between the strength of internal beliefs and the perception of external realities. The consequences of the dueling facts phenomenon include a degeneration of the close tie between education and democracy.

I urge you to buy and read the whole book.

Executive editor of issue guides and program officer at the Kettering Foundation. View all posts by Brad Rourke